This block is broken or missing. You may be missing content or you might need to enable the original module.
Focus on clubs

Unlike the distribution of French nightclubs spread across the whole territory, electronic music (techno/house segment) venues are concentrated in the Île-de-France region which hosts over a third of the total offering. It is followed by the Pays-de-la-Loire and Provence-Alpes-Côte d’Azur regions that host about one quarter of techno/house clubs. 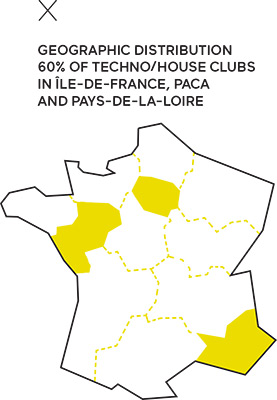 The proportion of techno/house venues with a capacity of 1000 people or more is twice as large as the proportion among nightclubs in general. Also there are notably fewer small-sized venues among techno/house clubs. 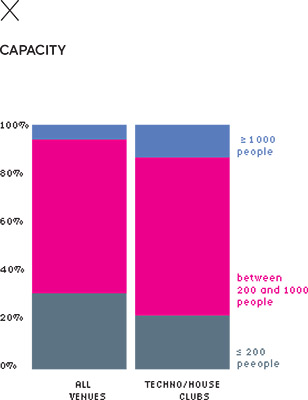 Electronic music venues are mostly medium and large venues. The ratio of venues with a turnover over 1 million euros is 3 times larger among techno/house clubs.

Clubs with a specific techno/house sets have an economic model markedly different from the rest of the sector: they bear higher staging costs due to artists with national and international fame being programmed each week-end. In return their audience accepts paying higher entry fees. It is a live show economy, generating a higher turnover as well as higher expenses.

- What is electronic music?
- The ecosystem
- The figures
- Festivals